IT'S SUMMER FESTIVAL WEEK IN TAYLOR! 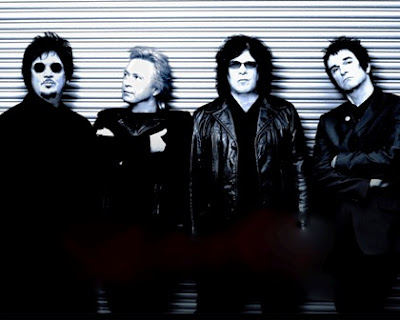 The 2015 Taylor Summer Festival has finalized plans for the main musical entertainment on both Friday, June 26, and Saturday, June 27 – and it’s turning into a party that you can’t afford to miss.

The Romantics with special guest Sponge are headlining June 26’s concert in the Sheridan Center Open Air Pavilion, and the opening act will be local band Whiskey Riot. This electric trio of hot bands – and a VIP ticket partnership package with none other than Famous Dave's Bar-B-Que – makes tickets for this year’s main concert the tastiest bargain in town! For the $30 VIP ticket price, the bearer receives great seating, food on site from Famous Dave's and a couple of drinks. This is an advance-sale-only ticket and will not be available at the door. General admission tickets (standing only, no lawn chairs) are also available for $5 advance, $10 at the door.

Those interested can get tickets now online at Brown Paper Tickets (just search for "The Romantics” or click on http://www.brownpapertickets.com/event/1437781). You can also buy them in person at the Taylor Recreation Center near the corner of Goddard and Pardee in Taylor during its regular business hours. Call (734) 374-8900 for more ticket information.
Don't pass this bargain up, because VIP seating is limited.
Saturday evening, June 27, the Taylor Summer Festival offers a free country concert leading up to the Masco Fireworks. Headlining will be sizzling country band Annabelle Road. Proceeding Annabelle Road on stage will be Taylor’s own Joe Jaber and the Last Divide, along with two
other local mainstays, The Sarah Sherrard Band and Terry Jacoby & Rummler.

Doors open for the Saturday, June 27, concert again at 5, with Rummler taking the stage at 5:15, Sarah Sherrard at 6:20, Joe Jaber at 7:40 and Annabelle Road coming on at 9 p.m. before the Masco Taylor Summer Festival Fireworks Display.

FESTIVAL OVERVIEW:
The Taylor Summer Festival will have four full days of carnivals and other attractions appealing to any age group.

Elliott’s Amusements’ carnival kicks off the festival on Thursday, June 25, in the Pardee Road parking lot, adjacent to the western entrance to Heritage Park. The carnival will run from 4-11 p.m. June 25; 11 a.m. to 11 p.m. June 26 and 27; and 11 a.m. until 5 p.m. Sunday, June 28. Various ticket and wrist band packages for the carnival are available online now at (www.elliottsamusements.com). 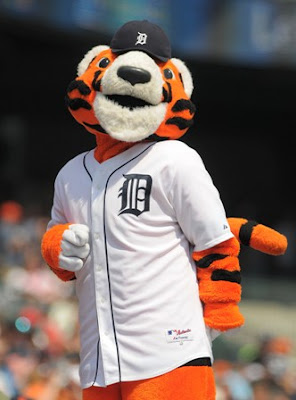 THE PNC BANK FAMILY FUN ZONE:
In an effort to make the 2015 Taylor Summer Festival as "family friendly" as possible, the City of Taylor will create a the “PNC Bank Family Fun Zone” near the patio area on the south end of the Sheridan Center Open Air Pavilion.
The zone, which will including plenty of fun entertainment and activities for children, will be open from 11 a.m.-5 p.m. on Friday, June 26, and Saturday, June 27. PAWS, the official mascot of the Detroit Tigers, will be appearing on Friday, June 26, from 1-3 p.m. Come and meet PAWS in the Family Fun Zone!
PNC Bank and Home Depot have already signed on to support the fun zone efforts.

FESTIVAL FOOD: CAN YOU SAY "BBQ"?

Famous Dave’s participation in the event lends to the festival’s “BBQ flavor,” which will be on display all weekend. Other food vendors will include Carolina BBQ and Ray’s Meats.

Famous Dave Anderson opened his first BBQ Shack in 1994 in Hayward, Wisconsin. It became wildly popular, serving up to 5,000 people a week in a town of only 1,800. Today, the Original Famous Dave’s is one of the most photographed restaurants in Wisconsin. The chain’s food is so popular that it has won over 700 BBQ awards – and is still counting. The Taylor location ranks as one of the most popular restaurants in the nationwide chain.

Carolina BBQ started with two former high school buddies, who wanted to start a competition barbecue team in 2003. Travels across the country led us to discover the rich traditions of Carolina-style barbecue. It wasn’t long before those recipes started earning Old Carolina trophies on the barbecue circuit. And, in 2006, the first Old Carolina Barbecue Company restaurant opened in Massillon, Ohio. They now have a location in Ann Arbor.

BACKGROUND ON THE ROMANTICS:

The Romantics started in 1977, adopting the name because they formed on Valentine's Day. They achieved popularity during the first half of the 1980s on the strength of the band's songs and music videos. The group's record debut was the 1978 single, "Little White Lies" / "I Can't Tell You Anything,” followed that year by the single "Tell It to Carrie" / "First in Line.” All of these were re-recorded later for the first LP, and that album yielded the hit "What I Like About You," which reached No. 49 in the U.S., No. 12 in the Netherlands and No. 2 in Australia, where the band was especially popular.

The Romantics achieved their greatest commercial success in 1983-84 with the release of the album In Heat, which was awarded a gold album in the United States for selling over 500,000 copies. The first single taken from In Heat, "Talking In Your Sleep," rose to No. 3 on the Billboard Hot 100 chart and hit No. 1 on the Hot Dance Club Play and Album Rock Tracks charts.

In addition to being a staple on classic and contemporary rock radio, television commercials and movies, Sirius/XM Satellite radio has also embraced The Romantics. Their songs can be heard on a number of stations including Little Steven’s Underground Garage. 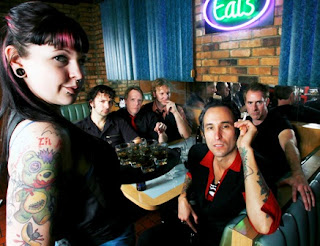 Formed in 1991, Sponge has proven to be one of the Motor City's heaviest hitters after gaining international notoriety with their debut album "Rotting Piñata,” with hits like "Plowed" and "Molly (16 Candles)." The band found itself receiving airplay on radio stations from coast to coast and in the MTV rotation. Both “Plowed” and “Molly” hit No. 5 on Billboard’s Modern Rock Charts, catapulting “Rotting Piñata” to gold and ultimately platinum status.

Sponge’s subsequent releases “New Pop Sunday,” “For All The Drugs in The World,” “The Man,” “Galore Galore,” and “Destroy the Boy,” showcased the band’s swirling sonic attack, rooted in 70's glam and of course, the Motor City influences of The Stooges, The MC5 and Motown – but still sounding distinctly like no one else.

“Plowed” continues to be the band’s signature rock track, having been spotlighted on Guitar Hero’s “Warriors of Rock – 90’s Rock Track Pack” – and on the Paper Jamz Guitar Series 2, in addition to the soundtrack for the Gerard Butler surf movie “Chasing Mavericks.”

Having shared stages the world over with Guns N’ Roses, Nickelback, Iggy Pop, Soundgarden, Alice in Chains, Kiss, Sponge continues to be one of rock’s most sought after live acts and the combination of The Romantics and Sponge should have Taylor rocking on June 26. 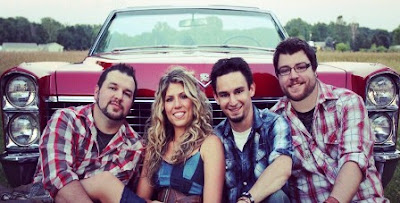 With a big-as-the-room sound, the ability to rock the doors off the toughest clubs, the heart to keep a crowd hanging on every note and the party going till closing time, Annabelle Road blows in from the intersection where rural and urban sensibilities meet. Tapping Motor City's rich musical well by way of Butcher Holler, this barnstorming band fuses the best of rock and country seamlessly to their polished originals.

Not many acts can claim being handpicked as "Next Big Star" finalists on Kenny Chesney's "Poets & Pirates" tour as their auspicious debut. In no time they had radio-ready single "Let You Bleed" in frequent rotation on Michigan's country dials--its airplay pre-selling out shows all over the state. Since then the group's electrifying stage presence has continued to captivate all comers, from Detroit's Downtown Hoedown to supporting heavyweights like Phil Vassar and Gretchen Wilson.

"We keep knocking on doors that are too big to be knocked on and they keep opening," said front woman Amanda Bailey. She leads guitarist Jeremy Temple, bassist Mike Zahler and drummer Donovan Tarjeft. 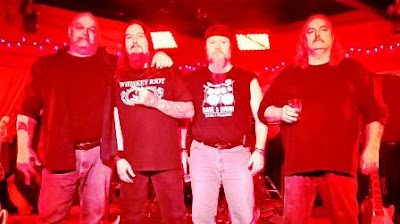 Established in 2013, Whiskey Riot is well-known around the Taylor club scene. Band members include Dwayne (The Riff Master) Adams (lead guitar), Keith (Big Diesel) Adams (bass guitar), Thumper Rich Loar on drums and James (Jiggaman) Elswick on vocals. They love classic rock and metal and guarantee that they are party band the rocks the place. 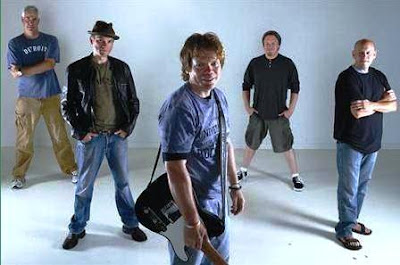 Rummler is another local band that should be well-known to Taylor club-goers. It features songwriter and lead singer Terry Jacoby, a former local newspaper writer and editor, and standout professional sports photographer Greg Shamus of Grosse Ile, who plays guitar and is a major contributor on the production side, earning the producer credit on the band’s debut CD. Mike Paulin of South Lyon is the lead-guitar player and also sings, while Bill Elliott of Tecumseh is the bass player and also adds harmonies to the vocals. On the drums, guitar and additional vocals is Nick Hura. 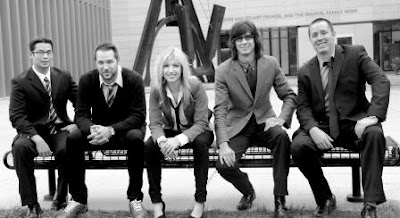 Sarah Sherrard’s music has been hailed as the rebirth of a lost era. Her refreshing reinvention of vintage, ‘60s sound is opening up a whole new world of possibilities for the young artist. “I’m just trying to make music that fits who I am and what I love. I never could have dreamed of how well it has been received,” said Sherrard. Sherrard’s debut EP, Where I Come From, was recorded in Nashville in early 2012 with select members of the band Lynyrd Skynyrd. This project allowed Sarah to explore her passion for more Southern Rock, country sounds while still letting her vintage style shine through.  Sherrard’s lead vocals are joined by Anthony Lai (lead guitar and vocals), Joel Sherrard (guitar and vocals), Daniel Lai (bass) and Tom Rexford on drums. 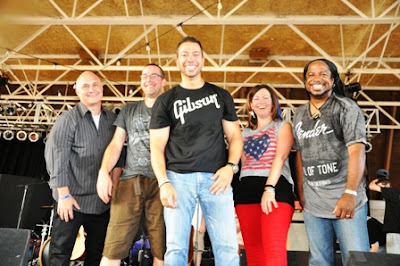 Upon the release of the debut disc by Joe Jaber and The Last Divide three years ago, Jaber, the Taylor native and passionate audio enthusiast, was content to set modest goals. With the arrival of Keys to the House, the encore masterpiece from Jaber and his remarkable, titanium-solid ensemble, this self-made singer, songwriter and guitarist is serving notice that he is exceeding his own wildest musical expectations. A heady, captivating mélange of rock ‘n’ roll, blues, roots, Americana and, yes, even a dash of country, Keys to the House showcases an artist with loftier goals, greater self-awareness, and expansive visions. The band consists of Jaber, Duane Harlick, Nadir Omowale, Daniel Lago and Chrissy Morgan.

PARKING:
Vehicle parking is available both inside and outside of Heritage Park for $5 and will be strictly enforced daylong on Friday, June 26, and Saturday, June 27. Handicap parking will be available at the Heritage Park Petting Farm (Northline and Pardee) and the Taylor Community Library. Official festival parking will be located at the southern end of the park (Northline Road entrance); First Albanian "Teqe Bektashiane" field (Northline Road and Racho, just outside the south entrance); and at the Wayne County Community College-Taylor Campus (outside the eastern most end of the park). Other private paid parking will be available in the surrounding areas.

TRAFFIC ALERT:
Pardee Road will be closed between Northline and Goddard at 7 p.m. Saturday, June 27 (fireworks night). All side streets feeding Pardee will also be closed in that location. Only residential traffic will be allowed through the barricades, and drivers will have to show proof of residency.

FOOTBALL CAMP is a big success 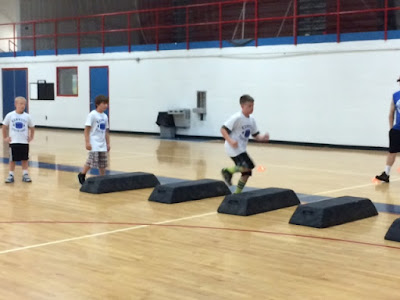 The first day of camp focused on offense and the second day was defense.  The kids practiced drills, throwing, catching, tackling, and positions.  All camp participants received a free t-shirt, showing Kennedy Pride.

The camp was instructed by the Kennedy High School football coaching staff and some of the Varsity players assisted.  The kids had a great time and enjoyed the camp. 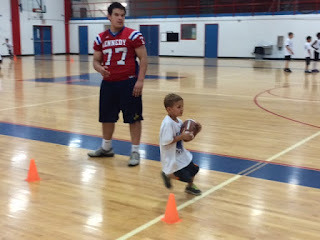 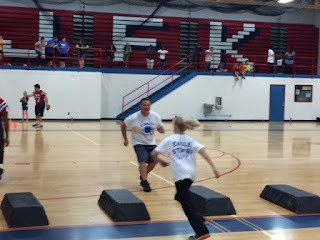 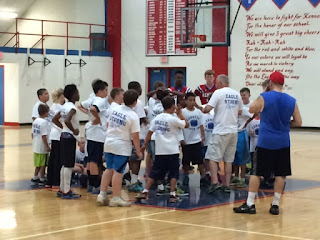 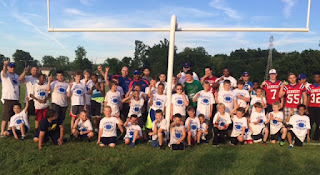 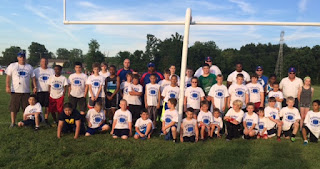 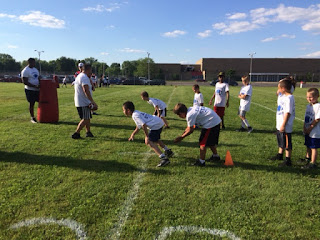 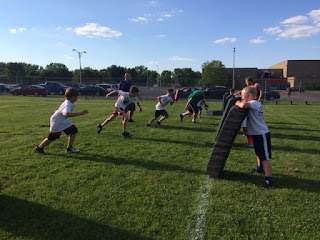 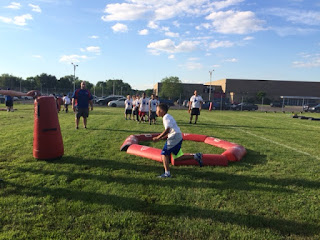 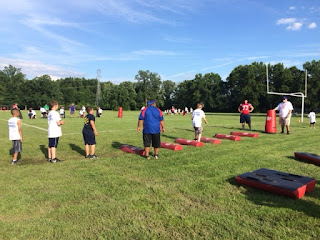 Posted by Karl Ziomek at 9:44 AM No comments: